UnetStack powered acoustic modems provide extreme flexibility to the user to automate processes such as the transmission of data frames (e.g. position updates) or signals, decision making after the reception, etc. enabling a hands-off approach to test various deployment scenarios. If you are using a program or a script to transmit and receive from your software-defined open architecture acoustic modem (SDOAM), it is often good to know your location (latitude, longitude, and depth), to make decisions such as when to transmit, what power level to use, etc. This is not a big problem if your acoustic modem is deployed in a fixed location. However, if the modem is installed in a mobile underwater asset like an autonomous underwater vehicle (AUV), such decisions are crucial.

Since transducers are electromechanical devices, transmitting at high power closer to the water surface will cause cavitation that will result in a bad communication link. This may even damage the transducer. Additionally, if you are close to a receiving modem, transmitting at high power may saturate the receiver thereby causing the receiver to not being able to decipher your messages.

Some SDOAMs like the Subnero modems in standalone configuration come with a depth sensor (with the option to add more sensors like GPS, compass etc.). Let us take a look at how a user would use this information to decide when to transmit and when not to, from a modem that is installed in an AUV.

Figure 1 shows our assumptions on how the various components are connected within the AUV for this article. A single-board computer (SBC) in the AUV is connected to the modem over an Ethernet interface. Both the AUV’s SBC and the modem are in the same network.

To start with, let us assume the user would like to send periodic updates from AUV as a broadcast message. There are mainly two ways to do this.

To send a simple broadcast message once, you can use the tell command as follows.

To execute this from a script, you can create a new file from the scripts tab in the UnetStack’s web interface. 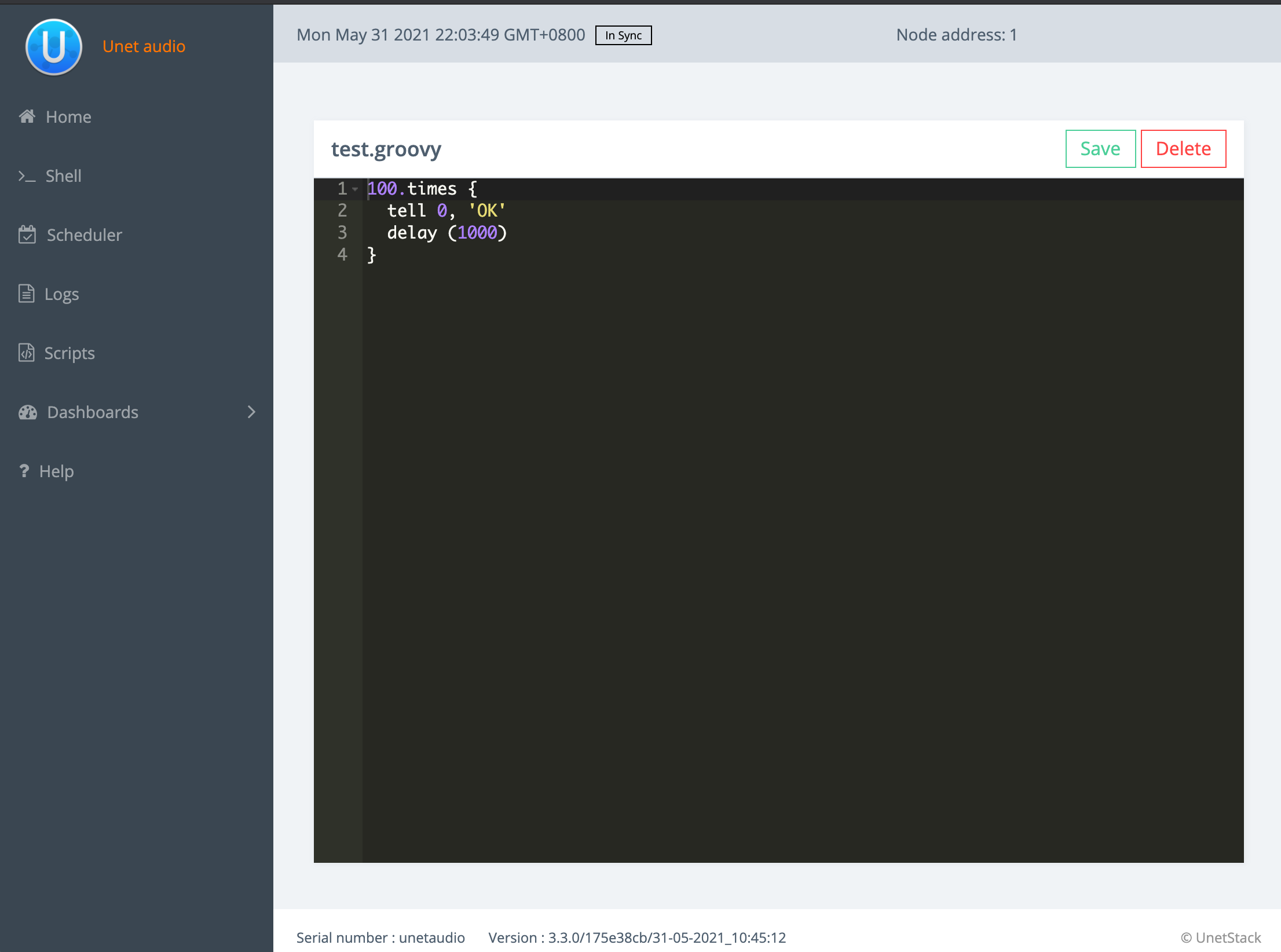 To repeat this 100 times, once every second, the script can be updated to:

The next step is to determine the current depth at which the device is, then decide whether to transmit or not.

In UnetStack, the NODE_INFO service provides a single place to collate node-related information that is commonly needed by many agents. One of the parameters of this service is the location which tracks the location of the modem are (x, y, z) in meters if the origin set, otherwise (latitude, longitude, z). If your modem has a depth sensor, the z value of node.location contains the depth information. You can update the script to transmit only at a depth less than -2 m, as follows.

What if your modem does not have a depth sensor (e.g. embedded configuration) and you would like to use the sensor data from your AUV? In this case, you will have to run a program in the AUV’s SBC to get the location data from AUV’s sensors and use Unet socket APIs to update the node.location parameter, periodically. A pseudo-code (in python) for doing this is as follows.

The above code can easily be adapted in other languages such as C. A pseudo-code (in C) for the same is as follows:

NOTE: The user will have to replace the above code with appropriate function calls to get the AUV sensor data.

The above examples can easily be adapted to check the range to a receiver (using range command) and adjust the transmit power level accordingly, to avoid saturating a receiver.

While acoustic modems were traditionally used as simple devices to transmit and receive data, UnetStack enabled SDOAMs to provide features to intelligently manage transmission and reception of data frames as well as signals based on various deployment scenarios.