[ Watch a short video about what's new in UnetStack 3.1 ]

Let’s take a brief look at some of the new features:

While UnetStack’s command shell provides an advanced user with limitless power, it takes time for a new user to master it. To enable users to perform common tasks quickly and easily, we added dashboards to UnetStack. Dashboards leverage modern web technology to present a nice user interface, backed by the power of the software-defined network stack. 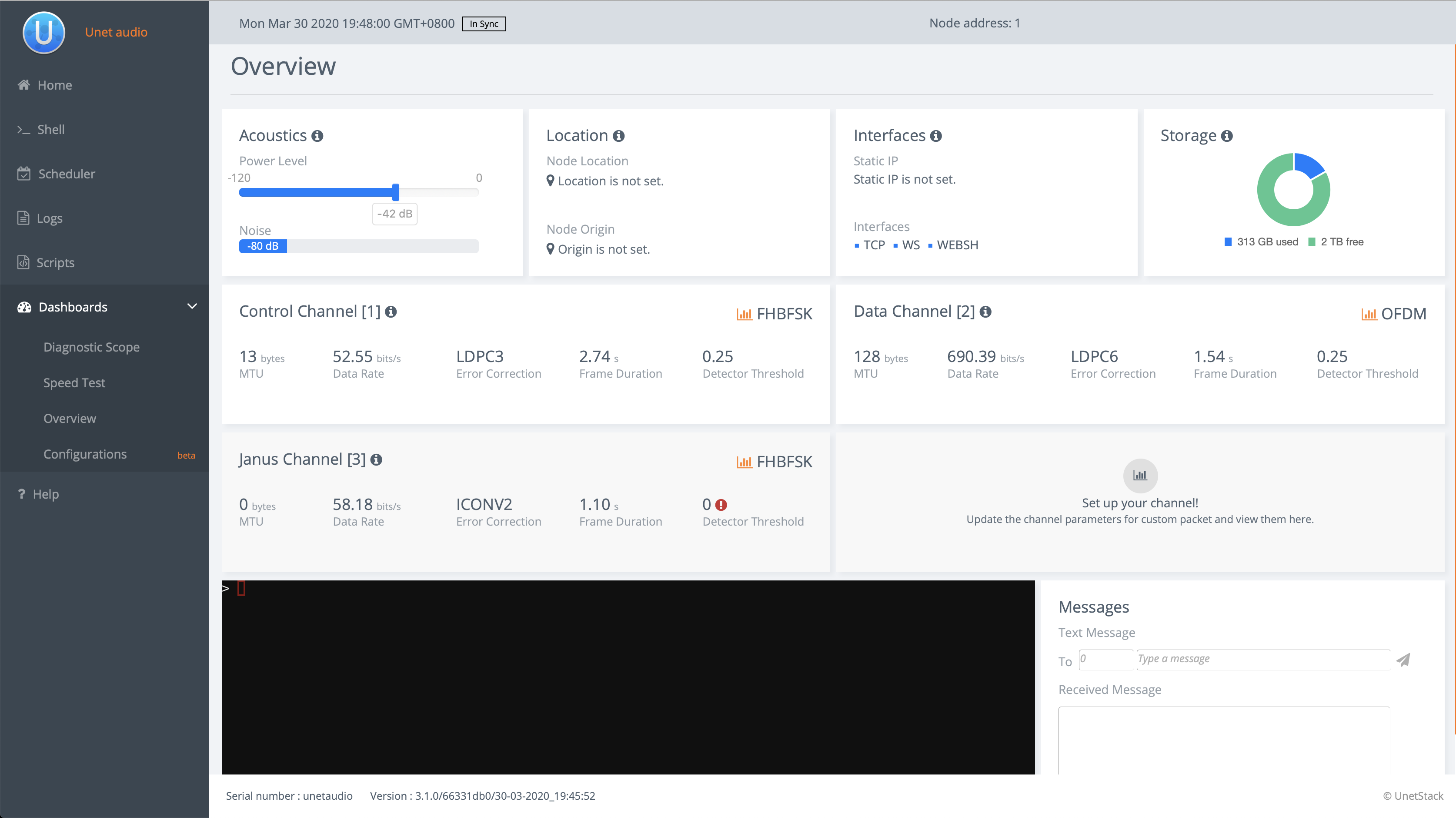 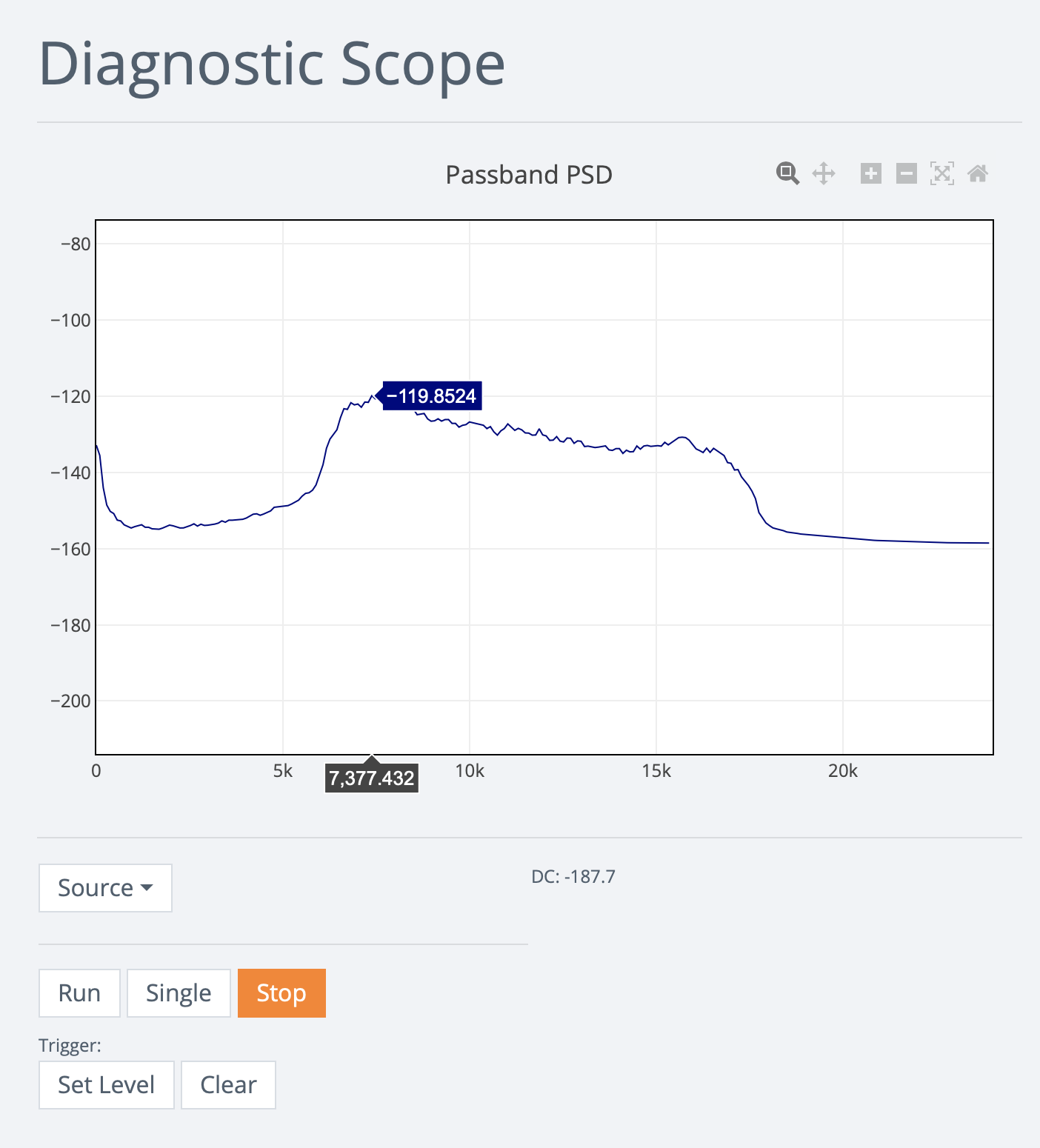 Underwater acoustic modems are used not only communication, but often also for acoustic ranging. The introduction of a localization framework in UnetStack eases the development of underwater positioning and tracking networks, enabling ranging, navigation, and tracking of underwater sensor, robots, and even divers. The framework not only supports UnetStack-based modems in the underwater network, but also treats other devices such as commercial off-the-shelf (COTS) transponders and pingers as Unet nodes. This enables legacy and low-power nodes to be easily integrated into an underwater positioning network. UnetStack now also supports broadcast ranging, allowing multiple underwater nodes to be localized with a single query transmission.

While underwater positioning networks may be used for many applications, we highlight a few examples to excite your imagination:

The routing service in UnetStack has served us well for the past decade. However, as our networks become more heterogeneous, and the demands on routing more complex, we felt the need to rethink how routing works. With the emergence of underwater disruption-tolerant networks (DTNs)1, routers need to make decisions based on the time-to-live (TTL) of datagrams being routed. Cross-layer optimization often requires routing information to be generated or consumed in parts of the network stack not traditionally involved in routing.

In addition to basic link state information, the ECLink agent in the premium stack now provides2 data transfer progress details for each peer node as indexed parameters. Since ECLink datagrams are often very large, this functionality enables client agents to closely monitor the progress of their data transfers.

To improve the performance of UDP links over WiFi networks, we have now reimplemented the UDP link agent to use a combination of UDP broadcast and unicast. UDP links now also support fragmentation/reassembly, data compression, and erasure correction coding. As a result, UDP links now support large MTUs, and retain good performance over WiFi networks and wired networks. As a bonus, Unet nodes now benefit from IP routing functionality, allowing Unet nodes to be transparently distributed across the Internet.

The fjåge agent framework forms the backbone of a Unet node, enabling communication between intelligent agents that cooperate to provide the network and application functionality for that node. All agents in one Unet node live in one fjåge universe, and can seamlessly communicate with each other. However, agents in different nodes live in different fjåge universes, and typically only communicate with peer agents on other nodes using protocols implemented over Unet links. UnetStack 3.1 introduces the concept of wormholes that connect multiple fjåge universes over a Unet link, allowing all agents in multiple nodes to transparently talk to each other!

Sounds cool, but why would I want to do this? The usefulness of this is best understood with a couple of real-world examples: 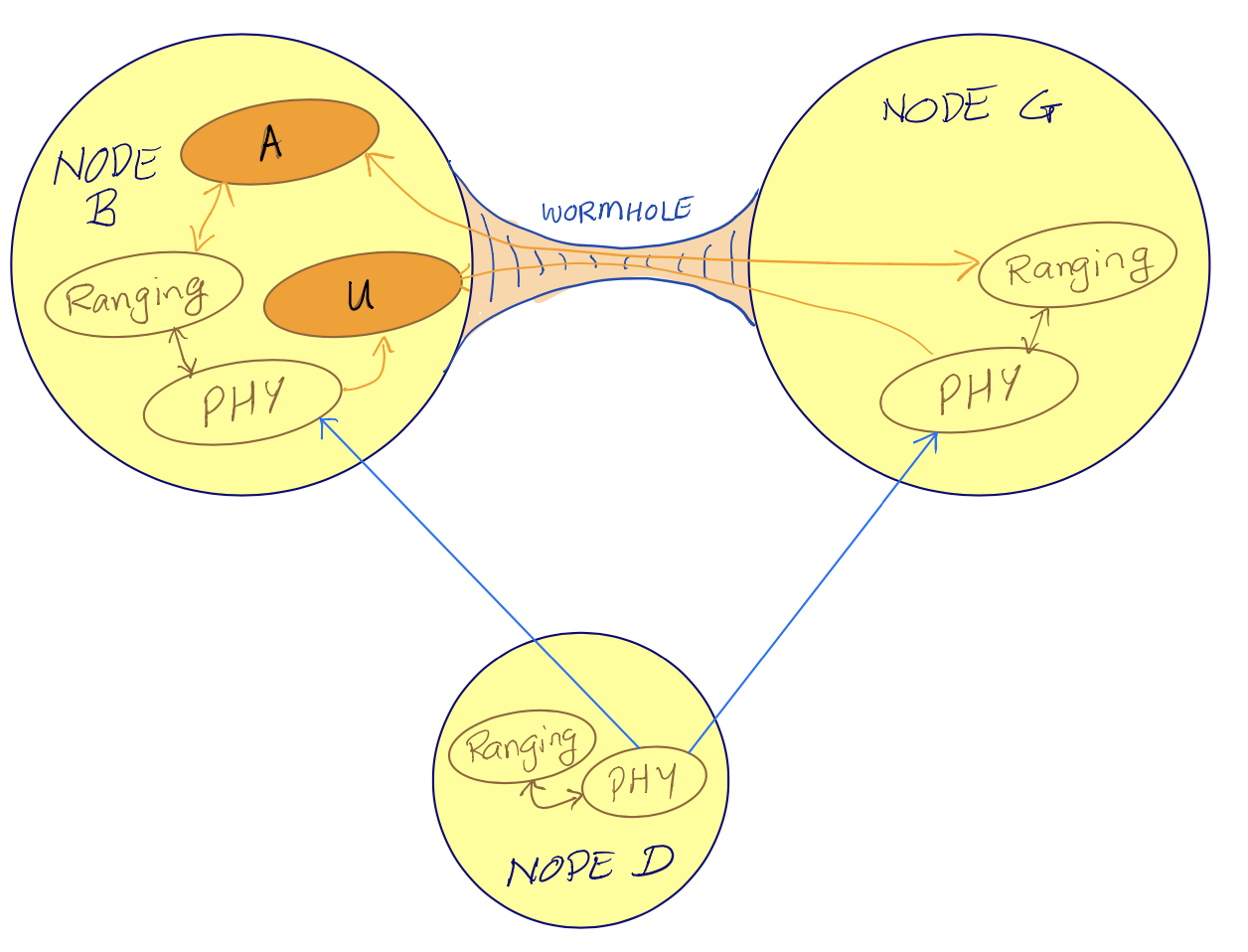 Diver tracking: Imagine a network with gateway node G (a standalone buoy), surface node B (deployed from a boat), and an underwater node D (diver). Nodes G and B have underwater acoustic modems and in-air WiFi connectivity. Node D is fully submerged, and only has acoustic connectivity to nodes G and B. An application agent A on node B wishes to track the location of node D. Agent A (on node B) can ask the ranging agent on the same node for a range to node D (since both agents live in the same fjåge universe). Agent A also requires the range from node G to node D, but is normally unable to ask the ranging agent on node G directly (since they live in different fjåge universes). The traditional approach to this problem would be to deploy a peer agent Ā on node G that communicates with agent A on node B through a custom protocol over a UDP link over WiFi. Agent Ā then makes the request to the ranging agent on node G on behalf of agent A, and relays the information back. With wormholes, none of this complexity is required! Connect nodes B and G using a wormhole over the UDP link over WiFi. Now agent A on node B can directly ask the ranging agent on node G for range to node D, and use this information to track the diver D.

Cooperative communication: Let’s take the same network with nodes G, B and D, but consider a different application. Diver node D makes a transmission that is heard at nodes G and B. However, neither node is able to successfully recover the transmission, as the area of operation is noisy and the packet checksum (CRC) does not match after decoding. In a traditional network, the transmitted packet is considered lost. With UnetStack 3.1, we can connect nodes B and G using a wormhole over a UDP link over WiFi. An agent U on node B now hears the BadFrameNtf from the physical layer of node B. It also hears the BadFrameNtf from the physical layer of node G through the wormhole. It can combine the log-likelihood ratios of bits in each BadFrameNtf, creating a new set of bit estimates that contain the information from both nodes. The combined packet may decode successfully, recovering the transmitted information from node D at node B. Although each node (B and G) has a single hydrophone, agent U is able to exploit the spatial diversity across the two nodes to effectively decode the combined packet!

The cooperative communication example above is not just a gedanken experiment, but a patent-pending technique that has been demonstrated to work well in practice. The Unity agent is a premium agent, available on UnetStack 3.1, that implements a refined version of the above cooperative communications strategy. It allows users to transparently implement spatial diversity with a set of COTS UnetStack-based underwater acoustic modems, each with only a single-receiver.

What does it mean in practice? Say, you’re on a ship, you have an AUV deployed in an area, and you’ve been receiving status updates from the AUV every few minutes. The AUV moves into an area where the connectivity is poor, and you can no longer successfully receive the status reports. If you have a second modem available on the ship, you deploy it from another part of the ship. Or maybe there is a gateway buoy deployed nearby with a modem, and you can connect to its modem. Either way, Unity magically uses the information from both modems to recover connectivity to the AUV!

If you happen to be lucky enough to have more than two modems, Unity can use the information from all available modems to improve communication performance.

Fragmentation/reassembly is often needed by many protocol agents in a network stack. Rather than have each of the agents implement the functionality individually, UnetStack now provides a fragmentation/reassembly framework that makes implementing protocols with large MTUs easy. For example, to fragment a large byte array data into fragments of size FRAGMENT_SIZE, we simply do:

To reassemble on the other side is easy too:

Here, we used the SimpleFragmenter that breaks the data into a series of shorter data chunks for transmission. To reassemble the data, we require all fragments to be successfully received.

While this breaking change may be a small inconvenience, this is a small one-time cost to pay for the benefits this provides in terms of compatibility with other projects. Additionally, fjåge parameters provide some useful functionality beyond the older UnetStack parameters. For example, when listing parameters, you can now easily differentiate between read-write (denoted with =) and read-only (denoted with ⤇) parameters:

Other than the major features listed above, UnetStack 3.1 has many under-the-hood changes. Some of these changes manifest as significant performance improvements:

What's so "super" about Super-TDMA ?