Multiple communication nodes deployed at spatially distinct locations can receive independent copies of the same information. This group of receiver nodes can act as a combined spatial diversity receiver when they cooperate by sharing copies of information. We term this distributed spatial diversity. The framework supporting this patent-pending technique is implemented in UnetStack 3.1 and is referred to as Unity. 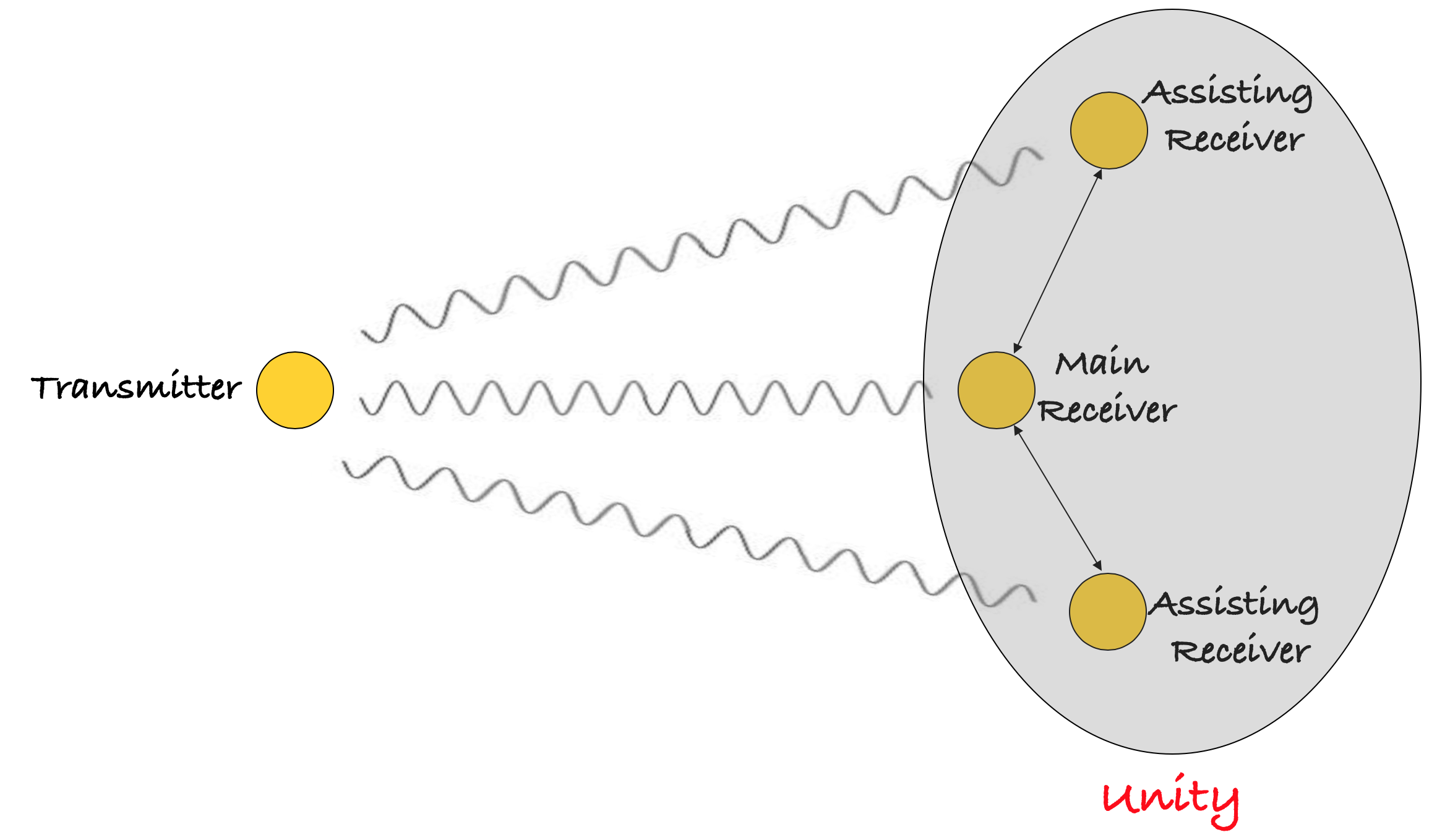 An illustration of the general overview of such a receiver system is shown above and few terminologies might help for further discussion:

The assisting receiver nodes are in cahoots with the main receiver to cooperatively share the information. This sharing of information usually happens over a short-range wired or wireless network (e.g., WiFi, TCP/IP, UDP/IP). Although, nothing stops one from using a different technology for sharing information.

What’s the immediate practical advantage one can see ?

Consider a case where you are on a ship with a modem deployed and you’ve been receiving status updates from a deployed AUV every few minutes. The AUV moves into an area where the connectivity is poor, and you can no longer successfully receive the status reports. We’ve all experienced being in that situation where the underwater communication link breaks, haven’t we?

If you have a second modem available on the ship, you deploy it from another part of the ship. Or maybe there is a gateway buoy deployed nearby with a modem, and you can connect to its modem. Either way, the distributed spatial diversity technique (Unity) magically uses the information from both modems to recover connectivity to the AUV!

So how to use Unity in UnetStack 3.1?

Unity is available as a premium agent and requires UnetStack 3.1 and higher.

1. Set up for receiver nodes to cooperate (an example):

To set up the group of receivers to cooperate over a short-range network, we use Wormhole agent provided in UnetStack. Transmitter node makes a transmission that is heard at all the receiver nodes. However, none of the nodes are able to successfully recover the information received, as the communication link is noisy. In order to share the received noisy signals among the receivers, we can connect the receiver nodes using a Wormhole. A UDP connection between the two receiver nodes, over any IP based network (Ethernet, WiFi), can be established by adding just a few lines of code on the receiver nodes as shown below:

Line (1) adds a UdpLink agent that implements a link protocol over UDP/IP for use over wired/wireless IP networks.

An example when you run the above on three simulated modems is shown below:

Line (2) adds a Wormhole agent which allows the fjåge messages to be sent between containers over a Unet link as shown below:

Line (3) tells the Wormhole agent to use the UdpLink as the Unet link to share information.

Additional set up on the assisting receiver :

We may not want to share the information from all agents, instead, we are interested in messages that are published on the Physical agent’s topic on the main receiver.

The above line of code is added only on the assisting receivers as shown below to forward only the messages received on the Physical agent’s topic to be sent over the Wormhole link.

That’s all there is to set up the receiver nodes to share the information and cooperate (in this case over a UdpLink). With this set up any message received on the Physical agent’s topic on the assisting receiver will also be available at the main receiver. This will become clearer through an example in the last section.

2. Add the Unity agent on the main receiver:

Now that the receiver nodes are ready to cooperate, we can go ahead and add the Unity agent on the main receiver node.

A user can take a look at the parameters of the Unity agent after loading the agent, type unity on the node’s web shell interface:

For example, in our three simulated modems, the node address of the assisting receiver is 31 and therefore we should set:

Once the assisters node addresses are set, as shown above, the Unity agent is enabled. And voila, you are ready to see the benefits of cooperating receivers in terms of reliability and effective data rate. An example of the output in the web interface with three simulated modems is as shown below:

Now that we are set up, what to expect ?

Now that we are all set up with an assisting receiver and a main receiver cooperating over a UdpLink, we would like to see an example of Unity in action. Although, we will not be able to demonstrate all the scenarios in which Unity will be beneficial, we can show how it works and what to expect out of it.

Let us transmit a frame from the transmitter node by sending a simple TxFrameReq message to the Physical agent as shown below:

The Unity agent now utilizes this message from the assisting receiver to publish the frame on main receiver’s Physical agent’s topic as shown below:

In this, simple example the assisting receiver was able to successfully decode the frame and it helped the main receiver via sharing this information. This is also called Selection diversity. The other cases where Unity agent will prove useful is where both assisting receiver and main receiver could not decode the frame successfully. In such cases, the information in BadFrameNtf messages (e.g., log-likelihood ratios of each received bit) is used to combine the information from both receivers and the Unity agent tries to decode the frame. This is also termed as Diversity combining.

The ability to utilize selection diversity and diversity combining at the same time is extremely advantageous in practice. This technique delivers tangible benefits to a user in terms of data rate and reliability over an underwater wireless link.